The Busan Biennale is a biannual international contemporary art show that integrated three different art events held in the city in 1998: the Busan Youth Biennale, the first biennale of Korea that was voluntarily organized by local artists in 1981; the Sea Art Festival, an environmental art festival launched in 1987 with the sea serving as a backdrop; and the Busan International Outdoor Sculpture Symposium that was first held in 1991. The biennale was previously called the Pusan International Contemporary Art Festival (PICAF) before it launched.

The biennale has its own unique attribute in that it was formed not out of any political logic or need but rather the pure force of local Busan artists’ will and their voluntary participation. Even to this day their interest in Busan's culture and its experimental nature has been the key foundation for shaping the biennale’s identity.

This biennale is the only one like it in the world that was established through an integration of three types of art events such as a Contemporary Art Exhibition, Sculpture Symposium, and Sea Art Festival. The Sculpture Symposium in particular was deemed to be a successful public art event, the results of which were installed throughout the city and dedicated to revitalizing cultural communication with citizens.

The networks formed through the event have assumed a crucial role in introducing and expanding domestic art overseas and leading the development of local culture for globalized cultural communication. Founded 36 years ago, the biennale aims to popularize contemporary art and achieve art in everyday life by providing a platform for interchanging experimental contemporary art. 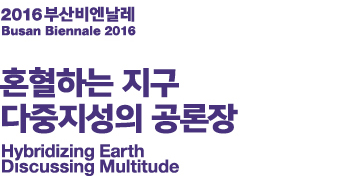 Artistic Director Yun Cheagab(Director of the How Art Museum)

The Biennale is a discussing multitude where artists and scholars of diverse religions, ethnicities and nationalities gather to discuss the issues of humanity’s past, present and future. Unlike literature, film and other cultural domains, this is a unique stage that can only be offered through the art genre and the biennale platform.

The Busan Biennale 2016 is expecting 121 artists from 23 countries through the Project 1 and Project 2. It will be a place where art as well as architecture, design, performances and seminars come together, a scene where different views and heterogeneous languages clash and coexist. This year, the addition of F1963 (KISWIRE Suyeong Factory, approximately 9,900㎡) to the Busan Museum of Art (approximately 6,600㎡) will create the greatest scale throughout its history of Busan Biennale.

The Busan Biennale 2016 will be contisted of two exhibitions (Project 1, Project 2) and a seminar (Project 3). It will address the relationship of continuity-discontinuity-interconnection between the avant-garde system before the 90’s and the global Biennale system that spurred since the 90’s. This is the underlying question of the ‘Biennale’ as a form of exhibition and it will provide introspection and criticism on the existence of artists.

The digital technology that transcends time and space and makes networking possible has tied the earth into a single community, integrating the world into a single market. Within an app installed on our smartphones, 10 billion people around the world transcend their religious, ethnical and national boundaries and are networked together. Humanity is currently living in a ‘generation of multitude’ that no other generation has ever experienced.

It came to me that a biennale gathering artists and scholars of diverse religions, ethnicities and nationalities to discuss the issues of humanity’s past, present and future would be the most suitable form of exhibition for this generation of multitude. Unlike literature, film and other cultural domains, this is a unique stage that can only be offered through the art genre and the biennale platform. The Busan Biennale’s theme of ‘Hybridizing Earth, Discussing Multitude’ is well aligned to this concept. The ‘affluent but impoverished’ world resulting from hybridization of tradition and modern; human and nature; East and West; analog and digital; capital and technology; is what a hybridizing earth is. It is a place that must never be reduced to capital and technology, and a place where mankind confronting reality begins their resistance and escape.

‘Hybridizing Earth, Discussing Multitude’ is a place of discussing possibilities. It is an inconvenient and distressing place that reflects on inefficiencies of the market and human irrationality, and on art’s vulnerability to the market and its system. Like Walter Benjamin’s melancholy, perhaps a document of civilization is a document of barbarism at the same time. I hope this Busan Biennale will be the same.

Design concept related to the theme of Busan Biennale 2016; Hybridizing Earth, Discussing Multitude, is derived from ‘annual ring’ found on stem or root of trees.

Annual ring has different shape depending on rate of growth, but eventually has one line in common like cultural development.

Various cultures are developed on different geographical, historical, and political circumstances, but simultaneously grew on a sight of ‘mankind’ through the E.I.​